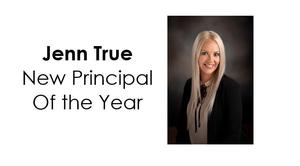 The Nebraska Association of Elementary School Principals has elected Jenn True as the 2022 Outstanding New Principal of the Year.
Jenn True has been in education since 2008 when she began her career as a third grade teacher and junior high volleyball coach at Grand Island Northwest. Mrs. True continued teaching and coaching at different levels in both elementary and middle schools, utilizing her leadership skills on school improvement teams, curriculum reviews, teacher development programs, and more for the next decade. In 2019 Mrs. True started her administrative career as the K-5 principal at Emerson Elementary in Kearney. Since becoming a principal, Mrs. True has continued to grow in her leadership capacity serving as the NAESP Region IV President, NAESP Public Relations Coordinator, on the Buffalo County Early Childhood Core Group, and on multiple Kearney Public Schools district committees.
"What else can I do to help? When you get to know Jenn True and her leadership, that philosophy becomes evident quickly,” said Jason Mundorf, KPS Superintendent. “Whether it's supporting district initiatives, supporting her teachers, helping a student, or volunteering for a state committee looking to improve education, Jenn True is a leader that will quickly lift a hand to help. She has used her servant leadership to lift up her teachers and students at Emerson, and she has built a terrific culture in that building. We are incredibly blessed to have many talented leaders in KPS and Jenn is certainly one of those critical leaders! Jenn has earned NAESP's ‘Outstanding New Principal’ with her passionate commitment and we are incredibly proud of her well-deserved recognition in KPS!”
In talking about Mrs. True’s determination to help those around her succeed, Mark Johnson, Principal at Sunrise Middle School in Kearney, stated, “She always strives to do whatever it takes to make those around her better. In the past four years she has served our district in so many different ways. She has been a member of the KPS District Security Committee, the KPS Social Emotional Behavior Committee, and the KPS Assessment and Academic Intervention Committee, to name a few. Recently she was charged with the task of helping a team of teachers to bring the district together on choosing an ELA curriculum amidst some controversy with the subject matter of the materials. Mrs. True became someone that others listened to for advice and guidance and helped point the teachers, as well as the community, in the right direction.”
Dr. Jane Strawhecker, UNK Professor in the Department of Teacher Education, spoke on Mrs. True’s ability to create a culture of community and pride. Dr. Strawhecker said, “One step inside the Emerson building and people will sense a strong feeling of community and school pride. In fact, Mrs. True knows every Emerson student by name. Jenn shows others how much she loves her job in that she is often the first person to greet them before the school bell and holds an important presence during the lunch hour. Her optimism and enthusiasm are truly contagious! When presented with a challenge, Jenn responds with grace, creative problem solving, and utmost professionalism”
A teacher at Emerson Elementary, Taylor Peters, highlighted Mrs. True’s capacity as a leader and advocate for our profession. She said, “On a personal level, for the past 6 years I have viewed Mrs. True as a mentor, colleague, and friend. She is constantly helping me develop my leadership skills and encouraged me to pursue a master’s degree in administration. I will always look to her as an example of hard work and dedication to the education profession.”
Mrs. True received her Bachelor of Arts in Education in 2007 having graduated from UNK with endorsements in early childhood and elementary education. She went on to further her education, receiving a Master of Arts in PreK-Grade 12 Reading in 2012, and then in School Principalship in 2018, both from UNK.
Congratulations
to Mrs. Jenn True for her outstanding performance as an Elementary School Principal at Emerson Elementary School in Kearney. The Nebraska Association of Elementary School Principals (NAESP) appreciates her contributions to the profession and is very proud to name Jenn True of Kearney Public Schools the Outstanding New Principal of the Year!